In the month of March, the number of health care jobs increased by 13,500, bringing the total to more than 13 million, 12% of all jobs. At the same time, overall employment fell by 663,000, erasing the meager gains over the past decade and raising the unemployment rate to 8.5%, the highest in 25 years. 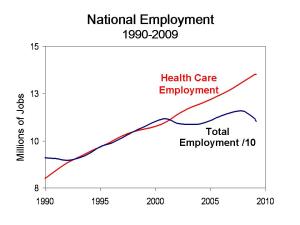 Economists expect job growth to resume as the economy recovers. But which jobs will grow?  Certainly not manufacturing. And not financial services. Many states are looking to health care for these jobs.  They see health care as their economic engines.

If health care expands to the same degree over the next decade as it did during each of the past two, how many more physicians should be expected? Historic trends suggest that growth of this magnitude should be accompanied be an additional 250,000 physicians, but our educational and training system will provide fewer than 100,000 of these.

If, as many believe, health care spending is sinking the economy, wouldn’t slowing the production of physicians be good? Or is health care an economic engine, as the jobs data indicate. The best answer is that It holds the potential for both, so finding the point of balance is important. It’s simply hard to imagine any appreciable growth in health care without the physicians who are at its epicenter.  So the next time you hear that we should expand access, increase quality and cut spending, reflect on what cutting spending means, not only for quality and access but for jobs.