Group Health recently published two papers, one in Health Affairs and the other in JAMA, both extolling the virtues of its Medical Home. These follow a brief report last fall in the NEJM and a lengthy description in the American Journal of Managed Care. In addition, Group Health’s Medical Home has been promoted by the Commonwealth Fund and others, and it is praised in an editorial in the current issue of Lancet. The big news is that costs for patients in their Medical Home were a full 2% lower than in conventional practices, hardly a great success – it wasn’t even statistically significant.  But was even this small difference due to the Medical Home, or was it  because Medical Home patients were less likely to consume care?

Group Health’s answer is that the 7,000 patients in their Medical Home were the same as the 200,000 controls, because the burden of disease, as measured by Diagnostic Cost Groups (DvCGs), was similar in the two groups. But while the DxCG system adjusts for diagnoses, age and sex, it does not adjust for sociodemographic factors, the strongest determinant of utilization. Nor does it appear to have accounted for health status. The chart below, from data in the AJ Managed Care publication, shows just how different these two groups are. Sadly, these data were not included in papers in the NEJM, JAMA or Health Affairs, which are read more widely.

Anyone should be able use fewer resources caring for patients who are more highly educated (and presumably higher income), who are more often white and whose baseline health status is better. Indeed, it’s remarkable that the DxCGs could have been so similar, since health status was so much better among Medical Home patients. What’s most amazing is that this more favorable group consumed only 2% less resources. I would have expected at least 20% less.

But even if Group Health’s model of care were valid, it’s important to recognize the practical limitations in generalizing from it. It took eight physicians to constitute the six FTE physicians who provided Medical Home care, and these physicians had patient panels that were almost 25% smaller per FTE than in Group Health’s usual practices. Nonetheless, Medical Home patients were more frequently referred to specialists (and that was statistically significant). With eight Medical Home physicians providing the same care as four full-time physicians working in the usual practices, it’s not surprisingly that those in the Medical Home had less stress. Patients were more satisfied, too. But there are not 25% more primary care physicians available to allow all of the primary care physicians in America to reduce their panels, particularly with many working part-time. And when there are too few, the poor come in last (see:  No One is Home in the Medical Home).

Beyond these basic concerns, I’m left with two nagging questions. Why, if the Medical Home is patient-centered, did it start with 9,200 patients in 2006, decline to 8,094 by the end of 2007 and fall further to 7,018 by the end of 2009, a loss of 24% of the patients in less than three years? Not too “continuous, comprehensive and coordinated ” for them. But more important in terms of study design, where did these 2,000 patients go? And why? And how much does their care cost? And why aren’t those costs in the final calculations?

And one last question. How can Group Health be a model for the nation when, according to its Service Area Maps, it accepts commercially-insured patients from eighteen counties (top panel) but Medicaid patients from only three (bottom panel)? 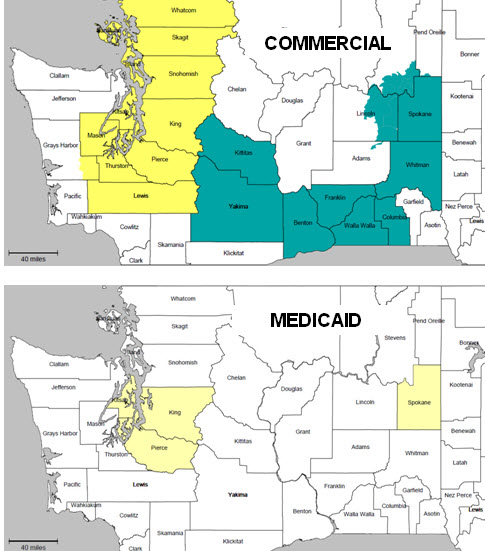 Most of all, if we want to decrease health care spending, we will have to recognize that the major remedial costs are associated with the added care that is provided to low-income patients. It’s time to stop talking about wasteful Medical Homes for college grads and start talking about safe neighborhoods, high-quality schools and workable systems of care  for a diverse and needy nation.